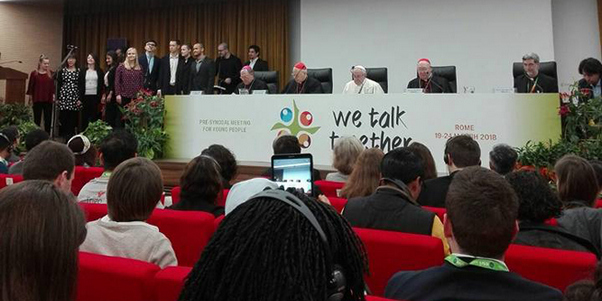 The past week over 300 young people from all the world gathered in Rome to discuss and exchange with each and with the hierarchy of the Catholic Church in Pre-synod meeting organized by the Secretariat of the Synod of Bishops prior to the Synod of Bishops on Youth Faith and Vocational Discernment which will hold in October 2018. IYCS representative to the pre-synod meeting, Miss Adelaide Iacobelli, National Secretary of MSAC Italy (IYCS Italian Movement) shares an update on the encounter in Rome

We kindly invite read the short article meditatively and to pray for the young and the Hierarchy who will partake in the Synod in October, that the Holy Spirit may guide them to bring about an imminent change in the church with lasting fruits for the spread of the Joy of the Gospel to all the people of the world.

I still remember the heart of us, young people, filled with joy, expectations and curiosity when Pope Francis announced the topic of the Synod of the Bishops 2018. A Pope who says: « All of us need to hear you [young people]» heats the hearts, filling them with gratitude. But Pope Francis, in his 5 years of pontificate has got us used to upset each custom, each expectation, even though they are really high outgoing expectations. We were even more excited when we knew that the general secretariat intended to convoke a pre-synodal meeting in which we could have the chance to speak up personally. In addition to the consultation through online questionnaires, a kind of tradition in the history of Church is opened: splitting the synodal meeting in two moments. I could define the first as the “Hearing Synod”, the moment in which the Church gets exercise of hearing; instead the second is the “Comparison Synod”, which is between Bishops, but in the light of comparison fruits’.

About the opening speech that the Pope turned to over 300 youth who met in Rome from all over the world, what struck us the most was its clear and direct language, «without anesthesia».

The moment in which this speech was announced, intentions were clear again: dear young people, Pope told us: « All of us need you», we need your capacity to be prophets for the world and for the Church. What has been asked to us is to speak up frankly, openly, without shame or fear of scandalizing: he asked us to take our life. With these words, Pope Francis seemed particularly clear in meaning that the Church has a young heart, because the message of the Gospel is always able to consult hearts each time, but there is the need for the Church itself to renew the form of her own pastoral practices, getting to everyone’s life in the world of today.

We must not be afraid to have «the nerve», he told us while he was hitting his face. Pope Francis always amazes us for his spontaneous, genuine signs and the words of yesterday too, when he left written track and he let himself be guided by what he had in his heart, letting a sign in a particular way, especially when he stopped on three biblical examples: Samuel, David and Daniel. And about the examples of these three young men, he paternally pushed us to think about a fact: «when God needs to keep the story going by the hard times he calls young people». But these three young men, he reminded us, are not Saints, but they are sinners, just like every one of us, even if we are ashamed to admit it. Young people make the prophetic message of Gospel effective and prophetic action of the Church when they can take the call of Lord, making progress, without getting uprooted from one’s own culture, despite one’s limits and missing, in a real spirit of abandoned to His volition. It does not matter if we are imperfect, it does not matter if we are doubtful, tidals. The only thing matters is for us being ourselves, really ourselves, with our imperfections, our doubts and unfaithfulness at pre-synod today, which are the same we have in the places where we are used to spend the majority of our time and in our community. If we are ourselves in all these places, we really become future tomorrow.

The Pope asks us to help all the Church to understand better how She can be at anyone’s side. Pope Francis invites us to dream and track a modality to open new itinerary and paths, realizing a dream of a Church next to all the people. Without fear, but entrusting ourselves, because «love knows how to risk», because every love implies necessarily some risks