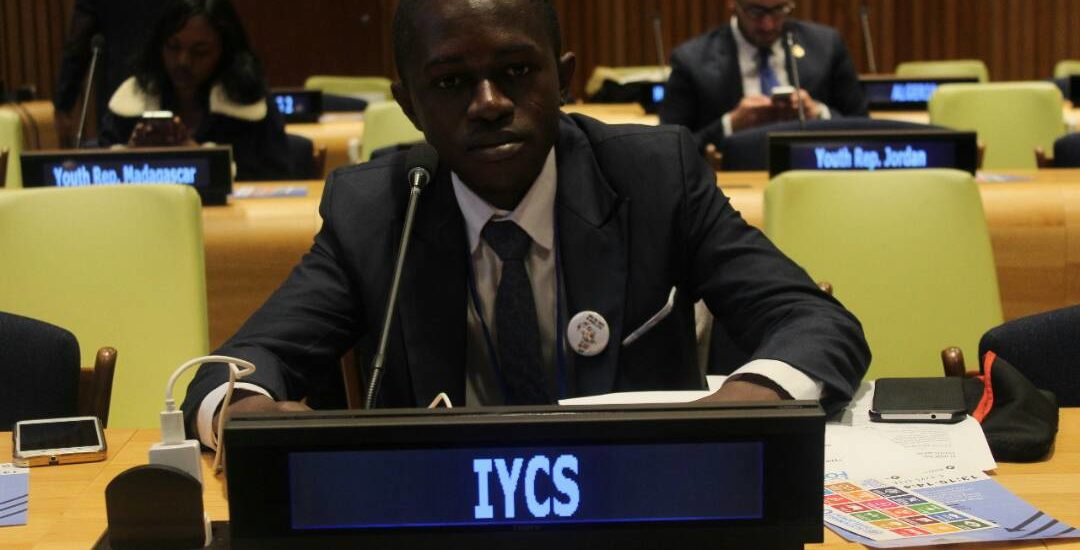 At the just concluded ECOSOC Youth Forum held at the United Nations Headquarter in New York from January 30 – 31, 2018, IYCS representative, Fulgence Kouassi, National President of YCS Ivory Coast presented a shadow report on the implementation of SDGs and the contribution of youth and youth organizations. The text of the report is here below. You can also watch the live video on our facebook page www.facebook.com/IYCSJECI or on webtv.un.org

Title: “Young people and the sustainable consumption in Côte d’Ivoire”

On behalf of the International Young Catholic Students (IYCS) and our partner organizations in the International Coordination Meeting of Youth Organisations (ICMYO) and MGCY, I have the honor to share with you our work on  SDGs implementation with specific focus on SDG12: “Ensure sustainable consumption and production patterns” on the occasion of this 7th ECOSOC Youth Forum. Our  contribution has focused  on the meaningful engagement of young people in Côte d’Ivoire (Ivory Coast) as well as the contribution of others youth organizations in the implementation of the 2030 Agenda. The Youth organizations have played a key role in the process of achieving the above results. Some local governments have invested through operational instruments to boost the implementation of the SDGs with and for young people.

In achieving the 2030 Agenda, Côte d’Ivoire, like other UN member states, has drafted a national development framework, under the Ministry of Plan and Development, called the National Program of Development. In this context, many development programmes have been set up and are in various stages of execution. In the drafting the national development strategy, several youth organizations were consulted but this approach was not inclusive enough. Youth organizations were handpicked, which was an exclusive approach.

Youth organizations in Côte d’Ivoire are really engaged and involved in several domains of activities and are ready to work on the implementation, monitoring and evaluation of the SDGs. Shadow reporting is an important tool that youth organizations can use to hold our governments accountable in the implementation of the SDGs. In occasions, official reports overlook contexts and realities that are visible in shadow reports.

There are a few examples from colleagues from other youth organizations present here in the room:

In the European context, national youth councils in many countries are trying to get involved in the process of Voluntary National Reviews, either through direct involvement in the government’s review or through shadow reporting. In 2017, the National Youth Council of Slovenia and its UN youth delegate presented their youth perspective on Slovenia’s progress towards all 17 Sustainable Development Goals as part of the government’s official report for their Voluntary National Review.

For 2018, the National Youth Council of Ireland and its UN youth delegates are preparing a “spotlight” report on young people, youth issues and the SDGs, in the context of Ireland’s Voluntary National Review. The European Youth Forum is working to support national youth councils in understanding how they can get involved in Voluntary National Review processes with the government or through shadow reporting.”

The International Federation of Medical Students also drafted a shadow report on India’s Voluntary Review and the National Health policy of 2017.

This shadow report for example revealed that in India policy changes had been made from time to time but their implementation was poor especially at the central level.

In Japan, the Japan Youth Platform for Sustainability, consisting of many different youth-led organisations in diverse thematic background as national youth platform, produced a shadow report as part of the Civil society report, that deals with not only youth issues but also issues affecting young people such as biodiversity, climate change, and financial architecture.

The process included collecting submissions from member entities and inputs through online and offline platforms. With this, the Japan Youth Platform for Sustainability is working hard to establish a youth seat in the multi-stakeholder round-table hosted by the government.

These are a few examples and we hope to see more of examples of shadow reporting done by youth organizations.

Each National Voluntary Review prepared by member states provides a great opportunity for youth organizations to present the real picture of how governments are engaging young people in the implementation of the SDGs and most importantly the youth perspective on how governments are truly performing in the implementation of the SDGs.